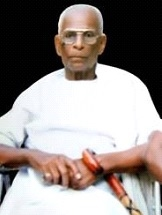 Originally from a middle class family, Chackosar was a force to reckon with for the feudal lords of Adoor during the initial years of the communist movement in Kerala. While working as a Teacher in government school, he was also a dedicated activist of the communist movement. After the split of Communist Party of India in 1964, he joined the right wing Communist Party of India (CPI). As CPI was in close association with Congress party during the Achutha Menon regime in the early seventies, Chackosar gradually accepted Congress party and its policies. The declaration of emergency by Mrs.Indira Gandhi made Chackosar a supporter of Indira Gandhi and Indian National Congress. He believed that unlimited freedom should not be part and parcel of a democratic system. Especially in India, he believed that certain limitations on individual freedom were necessary to curb the anti-social elements. He thought Indira Gandhi's emergency was just the way out. He envisioned an India free of atrocities and crimes against the poor unorganized mass. Chackosar emphasized on building an India where people are more dedicated to their duties rather than rights. Chackosar simply believed that the emergency of Indira Gandhi would convert India to a disciplined country like U.S.S.R and China of that time.
According to Chackosar, Communism is a way of life. It is a mind-set. He knew that many members of the communist parties were not actual communists as they were leading luxury life style. On the other hand, he spotted many communists in Congress and other parties.
As such, people of Adoor knew that Chackosar was a hard core communist till his death though he was an office holder in the Congress party at the assembly constituency level. He led a very simple life. He was a giver rather than a taker. Forgetting his own needs, he used to divert a major portion of his modest monthly income by way of service pension for supporting a bunch of poor people he cared for.